This is part 4 in a series about my experience at LEARN Academy coding bootcamp in San Diego, CA. You can read why I decided to go to bootcamp here, and also catch up with my thoughts on Week One and Week Two. 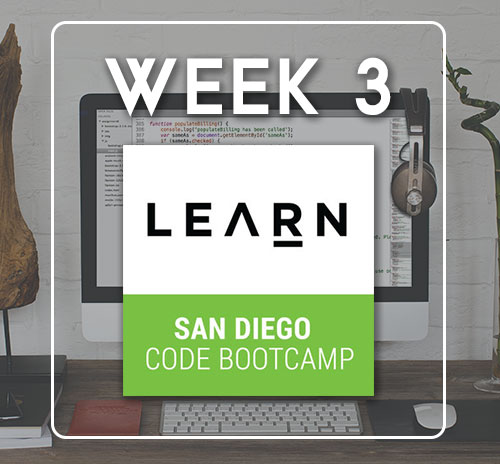 For the first time, we were paired up with our partners for the entire week, rather than one day at a time. I really bonded with my partner right away. She shines brightly both in personality and intelligence. We were really a good fit and we worked so well together. It felt like we could finish each others sentences. Whenever I had a block, she could fill in with a great idea and I was able to do the same for her. Midway through the week, we welcomed a third cohort to our pair. It took a bit for us to adjust, but with his input we were able to figure out our logic, make a plan and figure out how to implement our ideas. I realize how important it is to value your teammates and know that their perspective is important in making sure the whole team is headed in the right direction.

We started Monday learning jQuery. Again we were building on our previous projects and adding our new knowledge to our existing logic. I didn’t complete one of the challenges last week and it came back to bite me. I also have a sneaking suspicion that it will haunt me again next week, so it’s on my list of things to finish after I’m done writing. On the plus side, the Model-View-Controller design pattern has become much clearer to me this week.

We also did a little practice with interviewing and white board skills. I loved it because it gave me some confidence in my knowledge, but like every challenge, it reminded me of how much farther I have to go. One of the reasons I’m so excited about learning to code is that it is a never ending process. There will always be something new to learn and I LOVE TO LEARN! Sometimes (most of the time) the process of learning new technology is extremely frustrating, but nothing beats the exhilaration of when you finally “get it.” I think I may be addicted to that rush.

Tuesday afternoon the entire cohort practiced mob programming and built a game of Tic Tac Toe. I have an idea to add to the game and as soon as I have a chance. I want to update the computer’s logic so it places the “O” strategically rather than randomly, and I have a cute idea for the user interface. I will link my updates in a future post so you will be able to play it or review the code if you wish.

The mob programming exercise was a great introduction for the project that we worked on for the rest of the week. We built a game of Battleship. It was such a fun exercise. My group didn’t complete the entire list of challenges, but I’ve continued to work on the game over the weekend. It is a working game but there is still room for improvement. My 15 year-old son Cole has been working on it with me and to collaborate with my son has been incredibly rewarding. If you’re interested, you can view our Battleship project on Git Hub.

I also enjoyed going around the room and looking at how the other teams solved the challenges. It was cool to actually look at code written by other teams and be able to read and understand it. I will confess that my team was able to avoid some roadblocks by seeing the mistakes other teams ran into.

Our final activity for the week was code review. It was brutal at times, but it was a great experience explaining our thought process and defending our decisions. It was easy to get defensive and want to throw a teammate under the bus, but we were a team and we made the decisions together. I learned that if I believe in something, I need to fight for it because I will be expected to explain and defend it. I don’t regret any of the compromises we made in our game, I just wish I did a better job of defending those decisions. I wasn’t as prepared for the code review as I wish I had been, but I learned from the experience and I will do a better job next time. And, I’m pretty sure that was the point of the code review anyway.

It was hard to go to new places for lunch this week because I find myself wanting to return to some of the places I have already been to. But there are still so many spots within walking distance that I was able to try 5 new spots this week. Lunch this week was:

Monday – Tostadas for a gourmet tostada and a surprisingly fantastic cucumber lime water. Same owner as City Tacos and the food was similarly delicious.
Tuesday – urbn with a friend to share an Italian salad and a ginormous thin-crust pizza.
Wednesday – Sourdough pretzel with beer cheese from California Tap Room. Brought a Philadelphia style pretzel home for later too.
Thursday – Breakfast for Lunch at The Mission for some yummy chilaquiles.
Friday – Rockin’ Joplin, maybe the best tuna sandwich I have ever had from the Classic Rock Sandwich Shop