This is part 11 in a series about my experience at LEARN Academy coding bootcamp in San Diego, CA. You can read why I decided to go to bootcamp here, and also catch up with my thoughts on Week One, Week Two, Week Three, Week Four, Week Five, Week Six, Week Seven,  Week Eight and Week Nine. 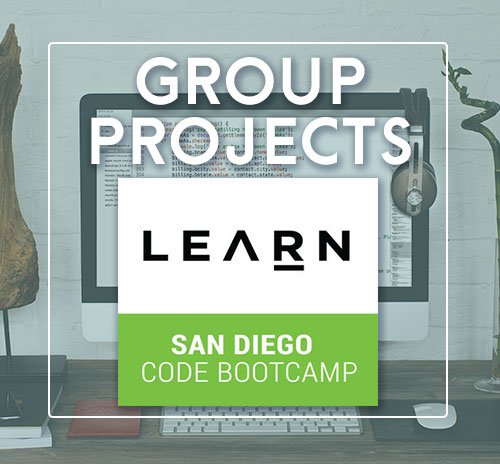 The time has finally come to apply what we have learned the past nine weeks and build our group project. Our whole cohort was filled with anticipation and excitement to get started on the final piece of this part of our journey.

Although we were anxious to jump in and get started, we spent the first day working through forming the teams, project pitches and selecting which project to build.  Our instructors spent a good amount of time explaining the agile development workflow, and encouraged us to form our teams and get started.

There were some hiccups with team formation, as some people were unhappy with how the process worked. We came together as a unit, worked together to hear everyone’s concerns and worked towards a solution that everyone agreed upon. I was really proud to be a part of  a community that valued everyone’s feelings and was willing to hear all voices and work to create the teams.

After we finalized our teams, we met and chose our project. My team built an app focused on bringing together people who are interested in Urban Exploration. We named it UrbEx and we began the planning process.

We started by writing user stories. This was pretty difficult as we really didn’t know what we were doing at first. We just went along this the idea that if we were an UrbEx app user, what would we want to do on the site. Our stories were broad and complex, but they were a start. We finished day one with creating the basic rails app.

I had so much anxiety going into day two. Here we were, with an empty rails app and a list of user stories. The task of building an app was overwhelming to me. I just didn’t know how we would be able to make this app happen. But with all journeys, you just start by taking a step. The tunnel is long and dark, but you can’t get to the end of the tunnel without starting to walk.

We broke up into pairs and selected a story. It was an amazing journey to take a story, implement the functionality and move it to the completed pile. Each day we were able to see more and more stories take the journey from “to-do” to “in-progress” to “completed”. Many of the stories had to be re-written or broken down into several smaller stories. And with each story we were able see empty pieces that needed new stories.

I’m a big fan of the agile process, as it kept us focused on smaller steps. That overwhelmed feeling I had at the beginning eventually faded away and we were able to achieve so much in a very small amount of time. After two weeks we had a pretty cool app up and running.

I was really happy with how we were able to learn how do things that we didn’t learn the previous 9 weeks. We had basic fundamentals in place and with a lot of help from google searches, we did it.

My favorite part of the class had to be Demo night. LEARN invited the community to come and see our final projects. I was so proud to show off what we did. It was fun to show potential students and the current students of another cohort what we were capable of.  It really is amazing what this group of people from diverse backgrounds with almost no coding experience could achieve in such a short period of time. I want to be clear – this was NOT easy. It was hard, which made it all that much more amazing.

It was also great to show off our work to other developers and local companies. I know that our app wasn’t perfect, there were plans that we just didn’t have time to finish. But I’m so proud of what we achieved. There is such a feeling of exhilaration that came from this achievement. I feel so good about it, I never want that feeling to end.

Our app was deployed to Heroku, so if you want to check it out, visit http://urbex.herokuapp.com/

You can also view our code on GitHub here