This is part 9 in a series about my experience at LEARN Academy coding bootcamp in San Diego, CA. You can read why I decided to go to bootcamp here, and also catch up with my thoughts on Week One, Week Two, Week Three , Week Four, Week Five, Week Six and Week Seven. 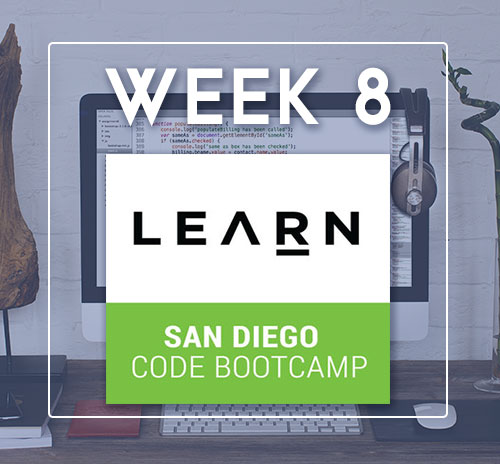 Since the last week was shortened due to the Labor Day Holiday, we spent Monday finishing up some Professional Development. We spent the day learning and practicing for the technical interview. There are so many concepts that you need to learn, but practicing and researching with others really made the time fly.

However, after a week away from full-day coding, I was certainly anxious to get back to it. Tuesday we jumped in learning CRUD (Create, Read, Update, Delete) which is the data lifecycle. We learned about GET, POST and PUT. We reviewed a lot of concepts and we learned my favorite Rails workflow so far, Scaffolding.

We spent a lot of time learning how things work behind the scenes and to now be able to generate all of the files we need in one command is amazing. I’m glad we took the time to learn the basics. Even though Rails makes things fast and easy, you still need to make changes and updates, so you need to know what to do.

We also learned about AJAX and JSON this week. And we said hello to jQuery once again. Oh, how I missed you JavaScript!  I might have been the only one happy to see jQuery again. It was so funny how we were confusing our languages up this week, as we were having to move between them in the same application for a change.

I really enjoyed the project we created this week. We built a neat little wildlife tracker app. We began with the basic app, then we added features and functionality. We added AJAX on Thursday and Friday we integrated a jQuery calendar widget. We also learned about the asset pipeline and we were able to add some styling to make the app a little more friendly to look at.

Even though it was a simple app, we really were able to add so much interaction and functionality with very minimal difficulty. I can see how Rails is so popular. It’s not easy to learn, but when you learn Rails you are able to get a web application up and running in an amazingly short amount of time.

I can’t believe we only have one more week of lecture before we start our group projects and begin our internships!  Time is flying by and YES – it’s because coding is so much fun!

I focused on new places for lunch this week and I wasn’t disappointed!

Underbelly – headed to the famous Underbelly for some delicious ramen

Classic Rock Sandwich – a return to this shop for another Rockin’ Joplin, and it was just as delicious this time around.

Up next week – Google Maps, User Authentication, Deploying an app with Heroku